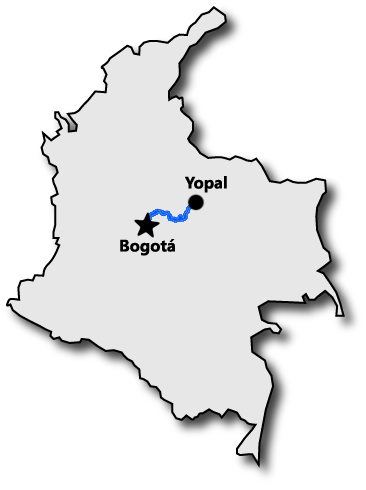 With Colombia's internal conflicts diminishing, travelers are rediscovering much more of the country that was previously off-limits. A great example is the fabulous Colombia Llano (the plains), which is the home to terrific rodeos, beautiful wide open spaces, and experiences of unique cuisine.


This route is actually a loop, so you can choose to go clockwise or counter-clockwise, with Yopal being the halfway point.


Going counter-clockwise, you head east from Bogota through lush green river valleys down the mountains until you empty out into Villavicencio, the gateway to the Llano, famous for its horsemen and ranching.


The most popular attraction in the area is Caño Cristales, a geological wonder comprised of rainbow-colored waterfalls and pools caused by naturally occurring mineral formations.  On the east side of the city is also the Bioparque Los Ocarros, which in a relatively small but wild space gives you a great introduction to the habitat of the Llano, including savannas and estuaries, and is home to many exotic birds and monkeys.


In the city itself, there's lots to see and do.  Start in the town center by visiting the Cathedral and its hodge-podge mix of architectural styles that somehow just works. Then go to La Casa del Joropo, the most important cultural center that offers interactive exhibits to illustrate the traditions, roots and history of the people of the Eastern Plains. If you want to see the nature of the area without leaving the city, the Botanical Garden has dozens of acres of native forest and habitat for taking leisurely strolls. Relax in the evening at Villavicencio's most popular parks like Los Fundadores, which has stunning water fountains, over 80 restaurants, and monuments fashioned by famous Colombian artists; or Plazoleta Los Centauros, a beautiful and historic square in the center of the city.


Crossing the Rio Guataquia, you now head north on the loop into the heart of the Llano.  Even though it's a tiny town, I consider it a must to stop and relax in the shady and sweet Paratebueno, which is popular for the variety of hot springs in the area. Then you keep going as the landscape opens even more into real ranching country, so start counting sheep! The best place to stop there is Monterrey, which is a great place for safe river swimming, country meals and lazy strolls.


Eventually, you'll roll into the larger city of Yopal, which is not much for culture, but it does have many hotels, restaurants, malls, parks, and sports complexes, all for you to kick back a bit and stock up on creature comforts.


Now, if you go the clockwise way from Bogota, you travel north to Tunja (see the route description "Bogota - Villa de Leyva") and then northeast into breathtaking lake and hills country, passing through another hotsprings hotspot, Paipa, and Duitama, who regard the cigars they make there better than Cuban.


Before continuing east, transfer in Duitama and head north where in less than an hour you come to what is probably the most photogenic site in all Colombia, the town and temple of Santa Rosa de Viterbo (pictured here).


Past Duitama again going towards Yopal, the next village you come to, Tibasosa, also worth a stop for the exquisite and rare fruit they grow there in the hills called Feijoa.


But the real center of attention on this northern route where you'll definitely need to spend some time is Sogamoso, which was the spiritual center of the Muisca people and where according to legend the Sun was born.  The city has a fine Archeological Park and Museum in which they have reconstructed the Muisca's Temple of the Sun.  Nearby is the Sacred Fountain of Conchuda, where priests performed important rituals of sun worship.


Sogamoso is also the base for visiting Colombia's highest altitude lake, Lago de Tota, and all the little amazing villages that surround it where you can dine on rainbow trout and Refajo (a mix of beer, malt, and apples) in Aquitania, spend time at the white sand beach of Playa Blanca (too chilly for swimming though), and dip into the thermal pools in Iza before rounding back to Sogamoso.


The mirror of Paratebueno on this northern loop to Yopal is Pajarito, a chocolate-box hamlet set amidst lush green hills aside a bubbling river; you will feel like your sitting inside a painting!


At last you get to the junction of Aguazul, in which you can branch north to Yopal a short distance away or continue south to Villavicencio and ultimately back to Bogota. Plaza, Santa Rosa de Viterbo
Get me to Bogota from: