Some research before visiting el Chota

The Chota (El Chota) refers to a dusty valley sandwiched between two ranges of the Andes in northern Ecuador, in which mostly Afro-Ecuadorians are now settled. 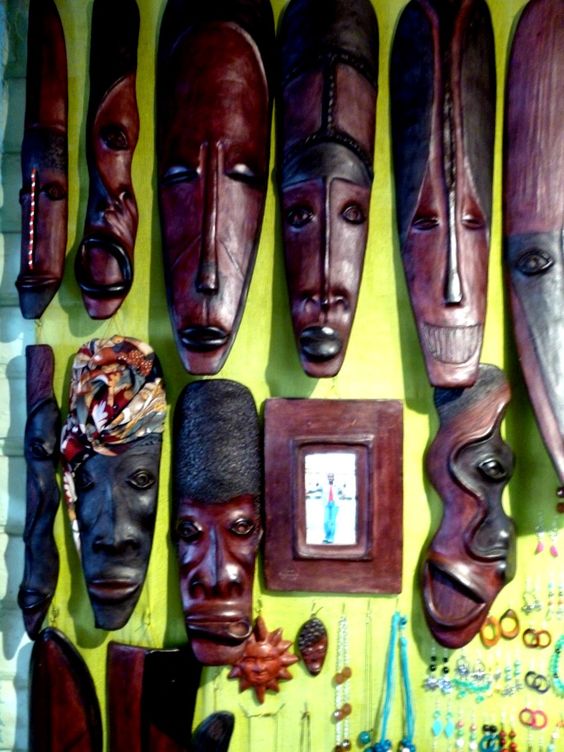 These culturally distinct residents were originally brought to Ecuador by the Jesuits to work as slaves growing sugar cane, tomatoes, beans, and a prickly pear called tuna. Today the descendants of these formerly enslaved groups are spread between 38 towns and villages comprising Valle del Chota (Valley of the Chota).

This valley is well-known for agriculture, winning soccer players, and for the historical masks!

The principal towns of Valle del Chota are Ambuqui (where you will also find mestizo culture), and Pimampiro, both agricultural centers where you can find locally produced wine, marmalade, and baked goods.

However, I was searching for another thing that is unique to El Chota’s home-grown culture:

I was told those could be found in villages like Carpuela, but it might be hit or miss to find folks home or in their workshops.

How did I get there?

A better bet would be to venture to the town of Mascarilla.

So I set out around lunchtime from the Bus Terminal in the north of Quito towards Ibarra.

Note: Because Quito is a long narrow city, the basic rule of thumb is if you want to go to points north from Quito you should depart from the small Terminal Carcelen rather from Quito's gigantic and new terminal in the south, Terminal Quitumbe. 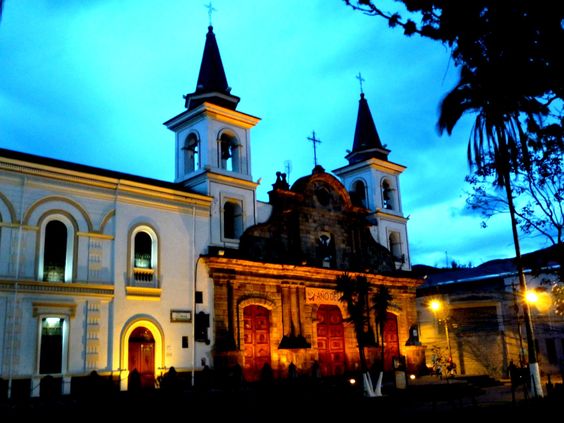 Ibarra is the halfway point between Quito and the Colombian border.  The town possesses the character of a restless older sibling forced to wear his Sunday suit to keep the family respectable. It upholds culture and patrimony, seemingly by obligation rather than by nature.

For some odd reason, the bus didn’t bother to stop in terminals, neither in Otavalo (where you expect it should) nor in Ibarra. Instead, it whizzed along the Panamericana highway and then the outlying streets of Ibarra, picking up and dropping off passengers more or less like a city bus. If I hadn’t had a sneaking suspicion I had actually entered the city of Ibarra and asked to be let off, the bus would have taken me right through it and I would have ended up in Tulcan some two hours later.

My first impressions of Ibarra

However, while in town, it is a must to savor the ice cream Ibarra is famous for, Helado de Paila, which is created by hand in a copper basin over a pile of ice and dished immediately into a cone.

Merchants all around the main square and its side streets have signs outside when it's fresh and ready to go, so I stopped into one where they were making it out of fresh strawberries.

I was a bit surprised that Ibarra wasn't as accommodating as the smaller and more touristy Otavalo some 30 minutes to its south. The hostels are shabbier, and the opportunities to browse and discover locally produced goods present themselves in a rather tepid way.

Still, the advantage of Ibarra is as a base camp for quite an endless variety of things to do around town, like the needlework of Zuleta and the hiking in La Esperanza or Yaguarcocha.

Also, the architectural patrimony of Ibarra, while not as accessible (lots of places were closed), is still stately and striking. So if you relax a bit and set your strolling shoes on auto-pilot, you will find Ibarra walkable, tranquil, affordable, and interesting.

My journey to the Valley of the Masks

From Ibarra's bus terminal on the southern outskirts of town, I got ready to hop aboard a bus toward Valle del Chota, about a 45-minute ride.

While plenty of bus companies go north to Tulcan and Colombia, the same direction as El Chota, only a couple of companies (Mira and Espejo) have more direct stops in the towns of El Chota.

So if you know me, of course, I made the wrong choice. Actually, I initially made the right choice and was told to just go out and wait at the Transportes Mira parking spot (an anden), but it would be a wait before the bus would arrive. So I grew impatient and saw that Expreso Turismo had rolled in and was looking for more passengers. I called out "Mascarilla?", they said sure, and I climbed aboard.

When will I learn!

It turned out the bus conductor, desperate for passengers, slyly avoided mentioning they would kinda sorta take me “near” to Mascarilla, not right to it. I was dropped off in the hot and dry basin of the valley, an intersection of the highway about 100 meters past a large police control checkpoint, somewhat like a toll booth center. From this intersection, the bus driver pointed me up the road and told me to walk about 1 kilometer where I would find the entrance to Mascarilla. 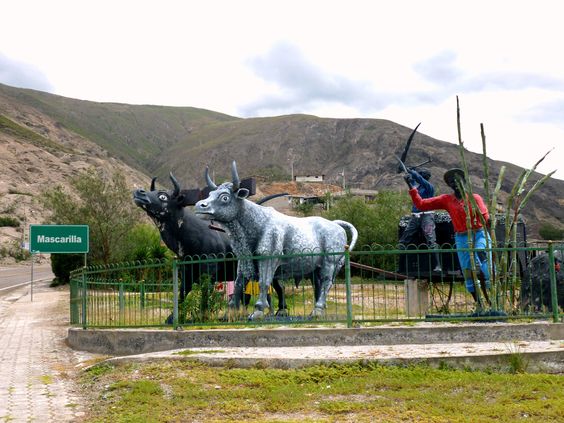 Don't judge a book by the cover!

At first glance, it looked like a scene from one of those 1970s desert horror B-films, but once I saw a few others happily strolling through the wilderness, I realized I was going to be just fine.

Going up the hill in the heat was something I was unprepared for, as this was a short day trip and I didn’t bring water or a walking stick. But at a slow pace, one kilometer is not worth whining about, and the beauty of seeing the real El Chota on the way was worth absorbing the way the local folks do. The sugar cane fields leaning into shallow streams, the dry eroding hills and their monastic silence, the whispering leaves of lime trees…why pass it up?

Of course, by the time I got to the boldly signed Mascarilla town entrance, the bus that I originally planned to take rolled right up alongside and let off some passengers. There at the head of the village, statuary depicts its hard-working roots stemming from plowing the fields with oxen and machetes.

I asked a vendor next to the road selling soda and chips to guide me toward where the masks were made and sold (Dónde puedo encontrar los mercadillos de las mascaras?). She pointed down the cobbled road toward a tall, yellow, square building some 200 meters away in the back of the village.

The mask factory of El Chota!

Once I got there, I could tell they don't get many visitors, which made the finding of it all the more gratifying.

A woman and her husband were outside next door, unloading building materials from the back of a truck. When they saw me approaching, they smiled. The woman searched through her pockets trying several different keys to let me in, making me think that they don't open the place often. But eventually, we got in, and I was stunned at the collection I saw in front of my eyes.

Their yellow building turned out to be a humble one-room gallery of masks made by teachers and apprentices alike, hung on burlap fabric over the concrete walls, with each panel representing one of the different artists and telling a little bit about their story.

The masks bear a consistency to a traditional form, but also an endless variety of characters and facial expressions. All the masks are for sale, ranging from $6 to $100 depending on size and detail, so I was welcome and encouraged to find anything I like and take it down from the wall if I wanted to bring it home.

It took me a long time as all the masks are deeply engrossing to look at, but eventually, I found a charming couple of masks for a total of $22 that I could fit in my soft backpack. The woman and her husband wrapped them up in newspaper and I was on my way. 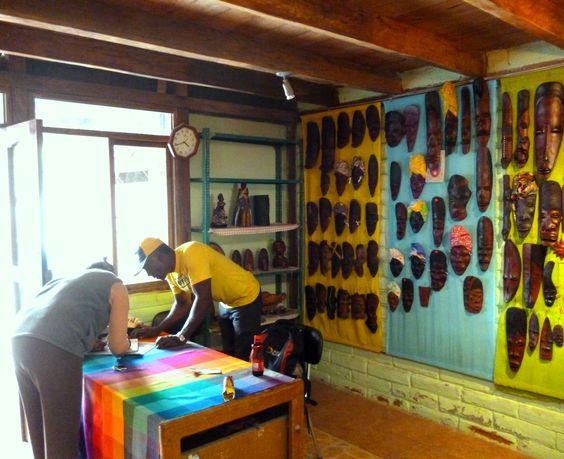 The ceramic mask-making extends to other artisan crafts, like painting, pottery, jewelry, and even molds for baking. All of the traditional work would be endangered if not supported through the good work of private foundations and volunteers, which have now produced a couple of cabanas in Mascarilla where you can stay and learn about the handcrafts, the local cuisine, and then be treated to the dancing of the famous bomba and caderazgo music.

If you do stay longer, definitely ask to see their unique bottle dance, where a bottle is poised on the head to make dancing and fun come together for a great set of laughs.

Alternative options to get there!

There is also another way to get to Mascarilla if you wish. You can take a train ride from Ibarra part way to the town of Salinas (not to be confused with Salinas on the coast), which is at the beginning of the Valle del Chota. The train ride schedules also are available on AndesTransit. The newly restored train and station allows you to embark on another type of adventure where you can see the countryside from off the main highway. Once you’re in Salinas, you can then ask for buses the rest of the way to either to the entrance to Mascarilla or to “La Y” (pronounced la yeh) where you can walk up the hill to Mascarilla as I did myself.

Regardless of which way you go, take your time to appreciate the exceptional Valle del Chota of Ecuador, as you won’t find something else like anywhere in the country, and you are only at maximum an hour or two away from base camp in Ibarra! 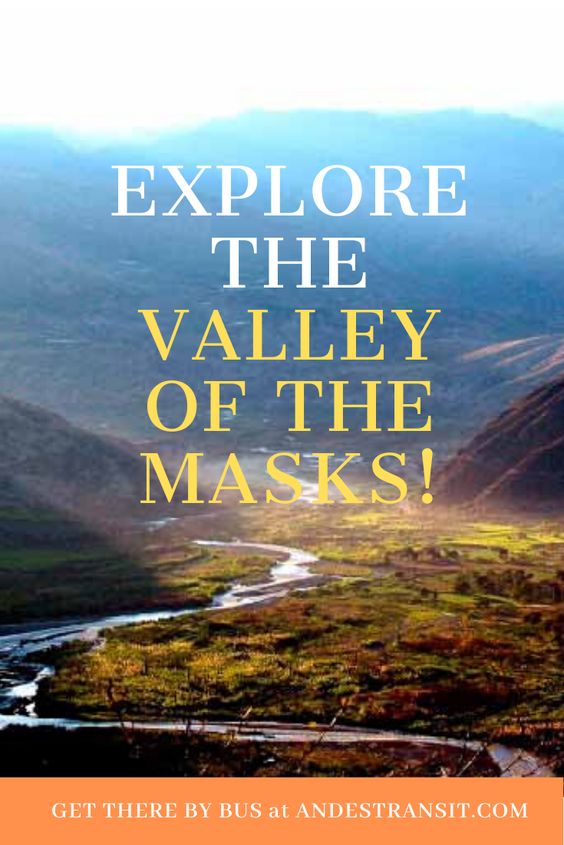