Getting to Puyango was totally worth it!

In traveling to Ecuador, how does the idea sound to you of having a Jurassic forest all to yourself? No, I don’t mean a Blair-Witch-getting-lost-in-the-wilderness type of a deal. I mean Puyango, a protected forest where you have the key to the gate, as well as clearly marked trails to show you hundreds of thousands of years of paleontological history before guiding you back safe to home base. Neither am I talking about a theme park either, where you are forced to endure cheesy rides or commercial attractions.

I’m referring to a pristine reserve in Ecuador that in order to get to it, you’ll have to put in some muscle, but the reward is a feast for your eyes!

The formal name of it is Bosque Petrificado Puyango, a bone-tingling petrified woodlands that divides Ecuador’s El Oro and Loja provinces near the border with Peru.

After visiting San Rafael waterfall, I thought I had enough experience to explore the jungle. However, getting there is not easy, but neither is it overwhelmingly difficult. All you need is the bus, and a little bit of charm…and ok, some good hiking shoes and a bottle of water.

I embarked from Machala after a visit to the steaming beach towns of Bolívar and Jambelí.

Heading south from Machala through seemingly endless banana plantations, the vista eventually yields to sugar cane, cattle pastures, and no shortage of evangelicals planting their churches.

I was admiring the green pastures dotted with orange-blossomed acacia trees as we rolled into Arenillas, an important riverside town that serves as a cantonal intersection for different routes going every direction.  Leaving Arenillas, you can start to see the borderlands with Peru to the west, and the ominous highlands of southern Loja to the South.

Finally, the bus turned around a tight corner and in front of us was a bridge that crosses the Río Puyango. Guarding its access is a military control station. This checkpoint is as close as you can get by public transportation to the park entrance, so you can get off here as I did.  But, there are other alternatives I will describe later.

Traveling in Latin America is something I don’t usually do with a GPS. I prefer more social methods of navigation. Still, to be honest, I did think the park entrance was somewhere right in front of me and I just couldn’t see it.

So, I asked the rather cheerful military guard on the bridge, who to my surprise was in his own bliss listening to a Wagnerian opera, if he could point me the way.

“5 kilometers?” I retorted, given that by this time of day the temperature in the air felt like a sauna. “Are there guides for hire here, or taxis that can get me up there?”

I felt a bit sorry for the guy. Here he was enjoying Tristan and Isolde, defending his bridge from bad intentions, and I was causing him a grievous look of guilt for this poor gringo’s condition.

Quite valiantly, and making me a new fan of the Ecuadorian Army, he rose from his chair and bolted down the highway about 40 meters to the intersection with the dirt road, where he spotted a garbage truck coming down the highway towards him. He hailed it down with his arms (not his gun), asking them if they could do me a favor.

So that’s how I got to Puyango: standing delicately on the back bumper of a garbage truck with my backpack thrown in with the rest of the trash.

It was okay, as I preferred the breeze on my brow over the overcrowded cabin. Everyone traveling in Ecuador, at least this part, seems to need a ride. But I did have the company of two other friendly garbage collectors sharing the bumper, and they made sure I didn’t stick my neck out too far to get thumped by a passing tree branch.

The park office was the stateliest place in town, so hard to miss. It sits atop a gardened hillside like an Incan temple, and the outward appearances are a bit deceiving. The administrator scrapes by on selling obsidian key rings to supplement her income, and of course, she doesn’t have change for large bills.

She charged me an entrance fee to the park of $1, which included my rented key.

A key. To a forest. I was not grasping the connection.

But now is where I had to start walking, as I was still not truly at the entrance. I suppose she could have drawn me a map, but her series of hand and wrist signals seemed good enough. Proceed directly up the dirt road; do not go over the bridge on the left, until you get to a “Y”, with the right part of the “Y” going farther up the mountain and the left part going down. Go with the left part of the “Y” and keep walking another kilometer or so and finally you’ll come to a rustic parking lot and service area with a little concession stand and bathrooms. Got it.

I did exactly as she said, and sure enough, a lonely woman at the concession stand ready to call it a day without probably making any income, was more than happy to sell me some water and a sandwich. I only stopped there to make my presence known and to show her I had a key, and to ask her where the actual gate was. She pointed me up a little paved trail, and there 25 meters or so, yes, was the padlocked gate.

Wow! That’s when it really hit me. How many national reserves do you know of where you don’t need a guide but you do need a key? I had this whole place to myself, but I had the comfort of them knowing I was there and waiting for me to return. How cool is that!

Protecting the gentle terrain of the preserve while also helping me not get lost had all been thought through well. A raised boardwalk took me to see all the major paleontological formations, fossils, and petrification, as well as just the serene beauty of the place, including creeks and waterfalls.

There are pointers along the way to two main pathways [sendero de los araucarios (petrified trees) and sendero de los petrinos (living trees)], and while the heat and altitude mixed together wasn’t pleasant, as long as I paced myself it was tolerable. It was nothing compared to the coastal mangroves, and wasn’t worsened by any nasty bugs.

The multi-million year-old tree trunks and stumps are considered to be one of the largest naturally occurring collections in the world. The sight of them only added to this outdoor monastery, completely serene and untouched.

Stopping to listen to exotic birds and their mating calls, leaning over the rail to stare into the crystal clear creek making a pool like shining diamonds, and being humbled at the foot of the gigantic and rare Petrino trees; it all was like a surreal prayer. At times I had to check my clothes as it was so easy to feel like I had been time-warped to a pre-civilization earth. In terms of living vegetation, beautiful examples of laurels, rosewood, lemon, almond, fig, and cedar can be seen, as well as fascinating local riparians like puyangos (for which the park is named), guayacanes, pechiche, and hualtacos.

If you’re more interested in critters, I really didn’t see much except some turtle doves and parrots, but there are definitely more here, including ocelots, peccaries, foxes, frogs, armadillos, agoutis, and iguanas.

The fossils I witnessed are actually remains left by the sea that once stretched to this region, and then left in its wake a dry forest pushed up from the sea floor through a variety of cataclysmic events. Some of the fossilized remains here are between 60 million to 500 million years old.

Because of the ecological sensitivity of the environment, there are few signs of garbage cans or benches or other conveniences, so I simply packed out the water and snacks I brought in, and left the lonely majesty of this other planet with no trace of my pilgrimage.

Coming back from Puyango and other alternatives

Getting back from Puyango to the main highway was slightly easier. The park administrator ran down the village road looking for someone who had a vehicle and looking to make a few bucks if they had nothing else to do.

You should expect to pay $3 for the kindness, but be prepared for their other errands along the way. My willing driver had to stop and help a farmer tranquilize a pig, load it into the truck bed, and then pick up a cola and chips for refreshment.

Once you reach the main highway, the rest is routine. Just wait there either at the military checkpoint or on the other side of the bridge at the country store, and the next passing bus will stop and pick you up to take you to Alamor, Macará, or Loja if you’re going south and east; or to Arenillas, Santa Rosa, Huaquillas, or Machala if you’re going north and west.

If none of this transportation serendipity suits you, there are alternatives. You can get off in Arenillas (north of Puyango) and look for the mom-and-pop bus companies (cooperativas) around the Banco de Fomento. They will take you more directly to Puyango but you will have to ask to make sure (ask “no quiero el puesto de control militar, quiero el pueblo actual de Puyango”).

Or, you can continue with the main buses past the military checkpoint another hour to Alamor, where you’ll find around town various private guide services or taxis that will get you door-to-door and even walk with you through the park and explain things if you wish. Granted, this may not be to your liking if you’re traveling in Ecuador on a tight budget.

Whichever way you choose to get to or get from Puyango, you’ll undoubtedly be moved by the lost world that it is, and that it visited you as much as you visited it.

Kali Kucera is President of AndesTransit and also known as "the bus guy" for his adventures across South America by bus. He is a co-author of "South America Borders" and "365 Days of South American Festivals." 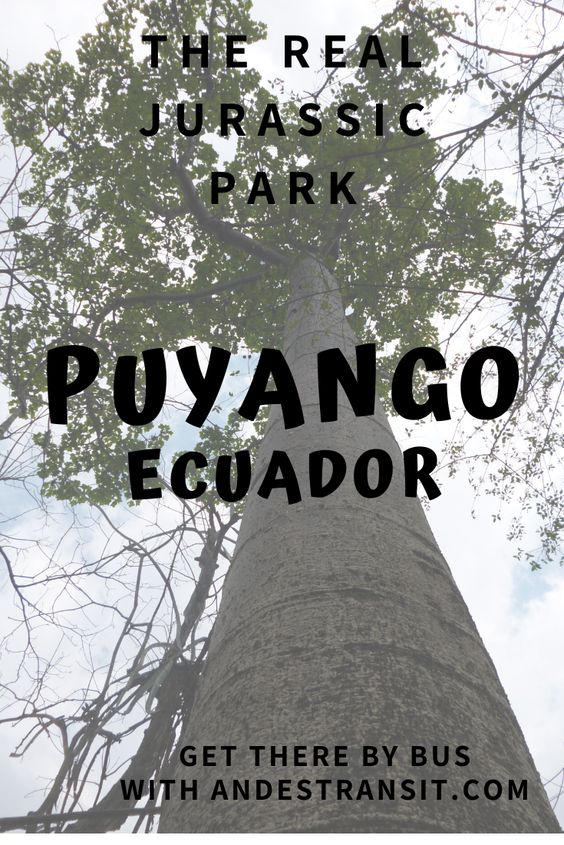