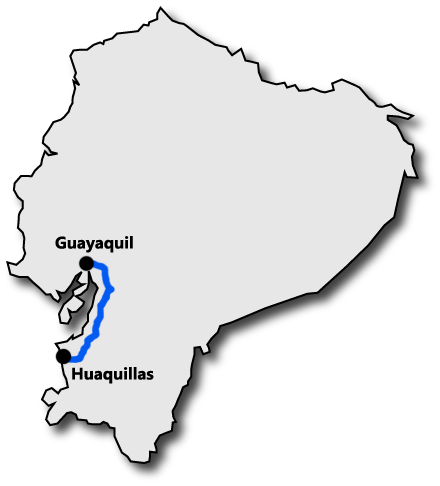 So, maybe you've had enough of the big city in Guayaquil and are looking for a nice escape without going too far. If so, this route will do the trick, and you can do as much or all of it as you wish.


Just "around the corner" from Guayaquil on the road to Machala is the Reserva Ecologica Manglares-Churute, a national park protecting the fragile mangrove ecosystem and its habitat, including a wide variety of water fowl, reptiles, and even dolphins. You can get off the bus to trailheads at various points near the communities of La Flora and El Mango, but it's best to ask the bus driver to let you off at the Centro de Informacion Churute.  There is a trail that takes you through dry forest and also to the large duck nesting lake Laguna Canción (Song Lake).


Near Naranjal is Hacienda Cañas, a working chocolate plantation where they really do a nice job of educating and entertaining both about the history and nostalgia of chocolate, and give you an opportunity to take part.  The catch is that they only cater to groups of a dozen or so, so you you should definitely have your hotel call them in advance to see if you can attach yourself to an existing group going through.


In Pasaje, go for a lazy river swim in the Laguna del Amor (the Lake of Love), and then take a gentle hike through the foothills up the Jubones River (or why not in reverse order!)


Machala is the largest city of the southern coast, and all buses go here.  They have done a lot in recent years to polish up the city streets and infrastructure, as it's not a natural tourist destination even though it's the banana capital of the world. If you're there in September, you can enjoy the annual banana fair and sample a million different ways to cook and eat the fruit.


Just fifteen minutes farther to the west of downtown Machala is Puerto Bolívar, which is where locals go to relax.  The main street is lined with seafood gastronomy and there's a small maritime museum.  However, the real reason to be there is to get on one of the waiting water taxis to go out to the beach on the barrier island Jambelí. It's not a spectacular beach, but there are a variety of hostels there, and the boat ride does wonders to cool you off from the humidity.


Puerto Bolivar is also the closest point of embarcation to get out to the mysterious but fabulous Isla Santa Clara and Isla Muerto (Death Island). Santa Clara is the largest seabird refuge off the Ecuadorian mainland, similar to and much more affordable and private than the Galapagos, where you can see birds, sea lions, iguanas, blue-footed boobies, and catch the migration of humpback whales and bottlenose dolphins.  Tours ut are not common, but just do some asking around at your hotel or restaurants, and before you know it, someone will hook you up with a charter and you'll have lots to write home about.


Arenillas steps up off muggy plains a bit to cool you down, sitting on the steep banks of a river by the same name. The town is happy and contented, reminding you a bit of Andy Griffith's Mayberry, and may be as far as you want to go, especially when you're tempted by the Hillary Spa and Resort that is right on the edge of town, and while pricey, of all resorts, this is the one to splurge on.


The end of the route is Huaquillas, the noisy and largest border town with Peru, and a great place to look for cross-border bargains. Jambelí beach house
Get me to Guayaquil from: