On February 2nd, 2020, a massive sinkhole collapsed underneath the Coca river right before it goes over the cliff.  This caused the river to divert much of its flow elsewhere and there is now only a small stream spilling over the edge of the mighty drop.  Eventually, I believe nature and gravity will send the river either back over the original cliff of San Rafael or create another natural water wonder here in the same forest reserve.  However, at the moment, access to the original path I took and to the overlook is truly forbidden while seismic geologists and civil engineers determine the long-term safety and stability of the canyon around the falls.

The article below still provides a glimpse into what was the extraordinary journey to San Rafael, even when it was a little less forbidden.  And who knows, if you want to venture what I did, you may get a kind geologist or park ranger to give you a waiver if you tread lightly.

"I will not be responsible for you if you go!"

Those were the foreboding words of the very well-trained park ranger at the gate to the Sendero San Rafael, the trail that was taped off with yellow "Peligro!" (tr. "Danger!") vinyl. San Rafael falls were intriguing to me, so I had to discover what was lying ahead, which immediately triggered my instinct.

But, all entry to hikers barred. 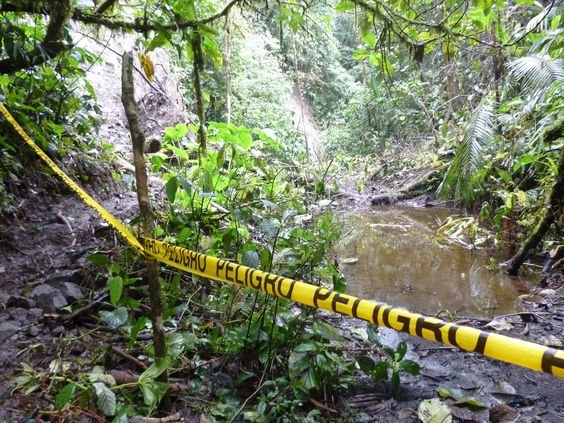 However, I had traveled a day and a half to get here, through pouring rain and sitting at desolate cloud forest bus stops along the highway. So, I wasn't going to just turn around without a fight!

Why did I want to explore San Rafael's falls?

It was the rainy season in Ecuador's Napo cloud forest. Easter Sunday, to be exact. The trail I had punished myself getting to had suffered two recent mudslides and one totally washed out bridge that was impassable.

"And?" I asked the ranger with my gimme-a-pass eyes.

Eventually, he relented and drew me a crude map on my newspaper to show me how to get around the washouts and mudslides, occasionally looking over his shoulder to make sure no one else was watching. At the end of his squiggly lines was the outlook point of the tallest waterfall in Ecuador, which with the amount of moisture in the air was bound to be all the more thunderous.

How's the path to the waterfall

Now, I wouldn't recommend doing this for those not in good physical condition, but then again, chances are you would enjoy the trail when it is long-since repaired and not so "forbidden." The luxury for me, though, was I had the forest to myself and could get to the falls the way I imagined locals and explorers did before there were any roads, bridges, or rangers around. 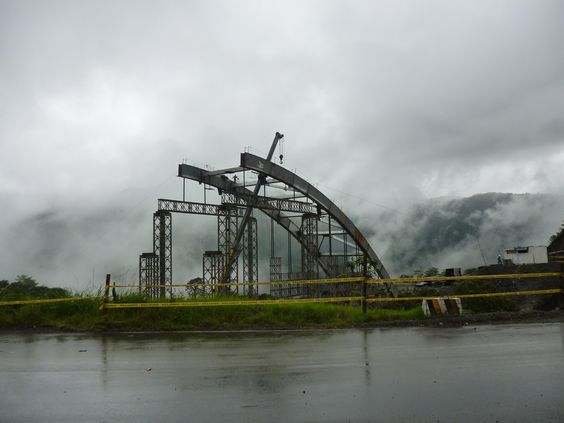 The path to see the falls of San Rafael is all downhill (which means it's all uphill going back). To get there, I took a bus going from Quito to Lago Agrio and got off at the Río Reventador, near the community of San Rafael. It's easy to spot as it's where the bus reaches a mountain pass with an enormous bridge spanning a chasm and the large Hostería Reventador sitting off to the left. If in doubt, every bus driver knows the spot as "La Cascada San Rafael".

From there, I walked back down the highway 500 meters to the signposted entrance to the Cayambe-Coca Reserve and followed the stone road even farther down to the bottom where I found the park administrative center and the trailhead to the falls. In total, about a 1km walk.

Having gotten my clearance to go ahead, I came to the first bridge on the trail, which was the washout. The creek is used to go over was down in a small canyon, so I had to slide my butt down a boulder to the creekbed, then walk up the creek a little way where there was a fallen tree I could shimmy over to get to the other side of the rather narrow but furious creek.

A yellow-tape was not going to stop me!

I then came upon the first mudslide, also marked off with yellow danger tape, but it looked passable enough as long as I could tolerate getting a little mud on my socks. I thought if whoever put the tape up didn't mind, why should I? 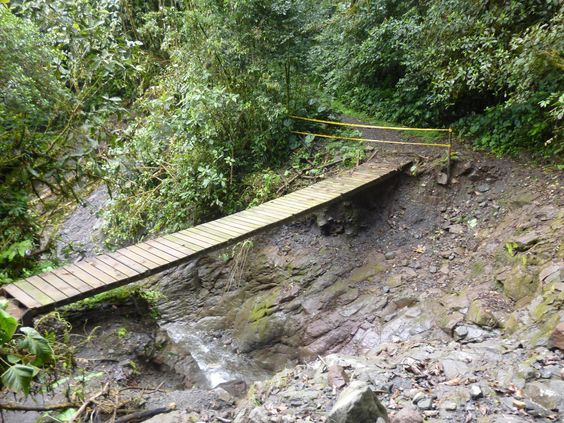 The second bridge was still in good shape, no problem. But the third bridge, while appearing in stable condition, stretched over a much deeper canyon than the first one and the park rangers didn't have much confidence in its safety, so it was also taped off as prohibited to pass over.

This one gave me some pause, and I foresaw the newspaper clipping describing how the bus guy met his demise not being hit by a bus, but by being squashed by a boulder.

But again, I let my eyes trace the stream and saw a good narrow spot I could jump over, but it would take some slippery canyon walls to get down there that forced me to guard every step.

Finally, after climbing over another mudslide, I reached the shady and solid ground of the last descent to the mirador, a simple two-story deck that gets you above the embankment's tree line to see the roaring spectacle of San Rafael, which was absolutely glorious to behold surrounded by the exotic jungle on all sides.

It was time to go back!

It's possible to continue farther down the path from the mirador to the bottom of the falls, but the ranger only gave me an hour's window before he expected me back, and I was already late.

As I stood there watching the power of primeval nature, the sun broke through the clouds, the birds sang, and I smiled at having made it against the obstacles.

Not to my surprise, on my return as I was shimmying across that fallen tree near the first washed-out bridge, the ranger had come looking for me. "Hola!" I called out to him and told him I'd meet him on the other side of the boulder between us.

We walked together back up the remainder of the trail, talking about buses and pumas, and other wild adventures, the cursed rain that always seems to spoil the fun, and other such small talks.

But then, right before we reached the base, he motioned for me to stop dead in my tracks.

'Shh!' he said and told me to stay where I was and not move a muscle, while he went ahead on the trail a few clicks.

I was certain he spotted a puma, or worse, a deadly viper in the trail.

He returned and said, "It's okay, I thought I heard tourists!"

He feared he would have to allow others the same adventure if they saw he had let me. We snuck back the remaining distance and he showed me on my way with a wink and a grin.

Don't let my tale discourage you in the slightest bit to pay a visit to the falls. In truth, the trail, in repaired condition, is one of the easiest and most accommodating of any to be found in Ecuador, and seeing these magnificent falls is well worth the effort!

If you decide to take the challenger, you can go back to Quito, or proceed from Lago Agrio to Coca. If you start your journey from Guayaquil to Lago Agrio, there's a bus service that gets you directly to this amazing yet to be discovered wonder 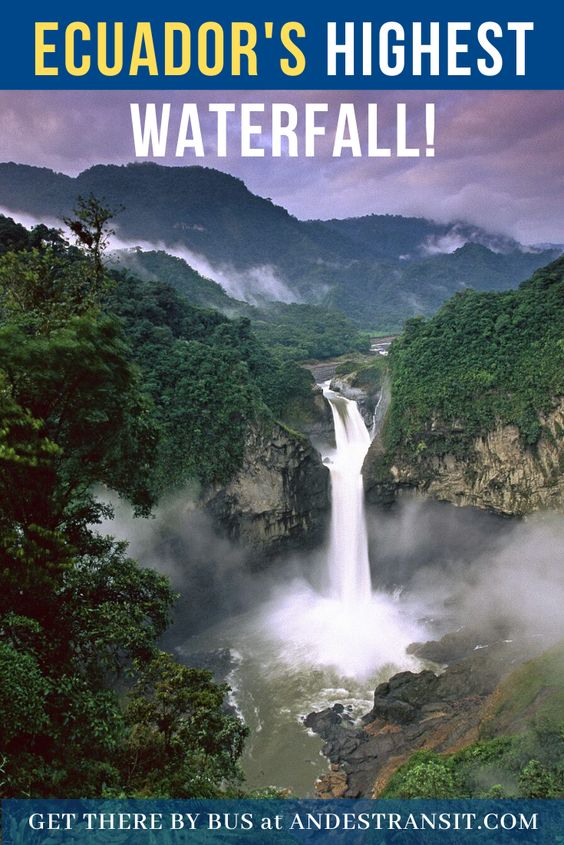